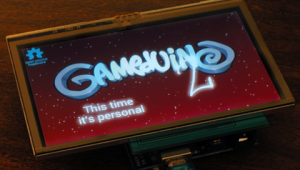 Say you wanted to build a games machine with an Arduino at its core, you’d might be a trifle stuck with a stock Arduino. You could do a lot of the interfacing to controllers or the logic, but what about the display and sound. Well, previously you may have got a Gameduino which gave you 400×300 512 colour VGA output, hardware sprites and audio in a nifty Arduino shield. It is pure 8 bit epicness.

But that was back in 2011 and now the sequel is being kickstarted, Gameduino 2, and its a little cracker. With a smarter graphics engine, the FT800, it handles full 32 bit colour, JPEG loading in hardware and has what is described as an “OpenGL” style command set. Now it displays 480×272 in 24 bit colour and can handle 2000 sprites, rotated and scaled. It has 256KB of RAM and 6 sizes of font, 8 musical instruments and 10 percussion sounds already loaded into its ROM.

But where would you find a display for this device? As part of the Gameduino 2, there’s a 4.3″ touchscreen so you have that display and control surface you need for a modern game. It also has a 3 axis accelerometer for orientation-oriented gaming, a headphone jack for audio out and a microSD slot. It basically looks splendid and may even be the missing link in getting more kids into Arduinos – show them this playing games, then take it apart and show them how they can take control. Did I mention how the hardware and software is all open source too (BSD licensed), so ripe for hacking!

I’ll admit I’ve already backed the project – it has passed its $6700 goal and still has 28 days of kickstarter time to go. Now, who’s going to make a handheld case and power kit for this beast.